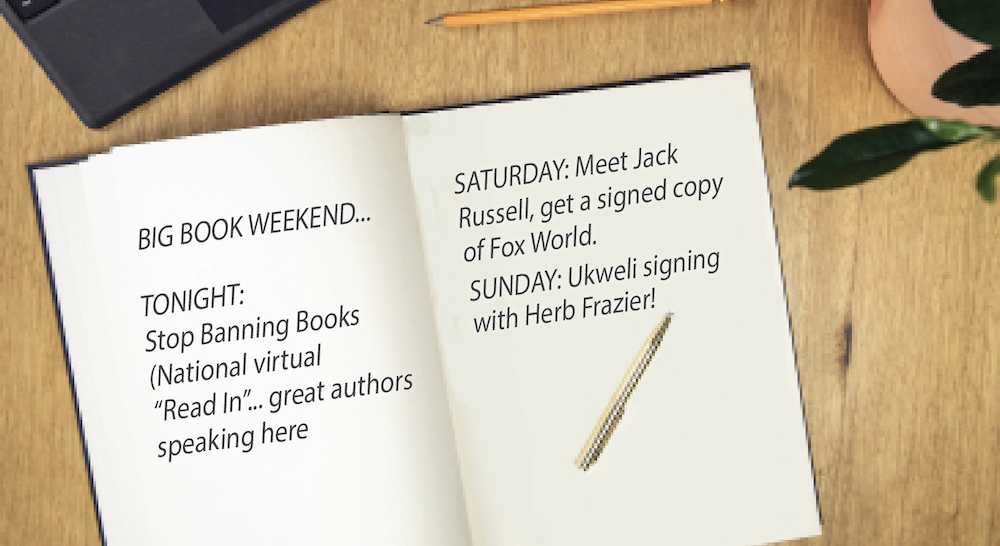 Okay folks, this is one weekend you won’t want to miss: Tonight’s virtual Banning Books Read In; Jack Russell’s 11-1 pm signing of Fox World on Saturday (treats and mimosas aplenty, just sayin’) AND Herb Frazier’s signing and talk about Ukweli on Sunday from 3-5 p.m. FREE refreshments at both live events!

“I hope that everyone who cares about the future of planet Earth will fight to save places like Fox World’s forest and its inhabitants.”

Join us for a very special book signing with Jack Russell, author of Fox World. Based on true events, Fox World takes the reader under the canopy of an urban forest on the outskirts of Washington, D.C. for a year-long walk with a weary sales executive and his muse, a wild red fox.  Aged, ill and injured, both fox and man seek healing in their journey, not only for themselves, but for the ecologically stressed forest that is under siege by those set to exploit it. They are joined on their five-hundred-mile walkabout by the fox’s forest friends – owl, buck deer, hawk, blue heron, and raccoon, and each animal’s story illustrates why this small forest is so soothing and majestic in its allure.

Starting in brutally cold winter, followed by the hottest, wettest summer on record, fox and man face daunting life challenges in their walks, from a heart attack and arrhythmia which end the executive’s career to a coyote attack and serious illnesses faced by the elderly fox.

Through these traumatic events, the two unite and bond for survival, and the fox’s wild perspective teaches his human friend unforgettable lessons about healing, coping, serenity, wonderment, mindfulness, and the simplest things. Drawn in by the fox’s courage and the plight of his forest as tree canopy destruction looms, the man decides to take a stand and help the fox and his animal friends.

Richly graced with gorgeous nature photos and infused with insights that can only be imparted by those who have come to genuinely appreciate life, Fox World is an exhilarating walk in the woods that you’ll never forget.

“As a wildlife rehabilitator who works hands-on with red foxes every day, this book took my breath away. The author truly grasps the essence and magic of these beautiful, spiritual animals and he artfully employs a fox, Mr. Fox, as a co-narrator to describe the hardscrabble challenges of a fox in the wild. Fox World is a bookshelf staple for fox lovers and –for those who have been graced only once with seeing a distant fox walking the wood’s edge, and desire more– Fox World will transport you there.” – Elise Able, Founder, Fox Wood Wildlife Rescue, foxwoodwildliferescue.org

Jack Russell is a first-time author, not counting dozens of hundred-page PowerPoints written in Corporate World. Jack wrote Fox World after suffering sudden cardiac arrest and undergoing several heart procedures to save his life.  Afterwards, he sought the calm refuge of a nearby forest in which to walk and relax, and there, he reunited with an aging red fox that he had helped as a pup.  Fox World is based on true events and was a real-time composition as Jack wrote the 85,000-word book on his smartphone as he and his co-narrator, Mr. Fox, walked daily. He lives in Lake Frederick, Virginia with his wife, Susan, and their Jack Russell terriers.

We are honored to host this signing and book discussion around the new release from Charleston’s own Evening Post Books: Ukweli: Searching for Healing Truth.

You’ll get to meet Summerville’s own Herb Frazier as well as contributing authors from the project, and we plan to engage in a substantive discussion… don’t miss this one, folks.

Ukweli is the Swahili word for truth. This book meets this moment in America as a healing truth to overcome the trauma of slavery and the decades of violence that followed it. The personal accounts and insights from forty-five writers and poets will educate White Americans about the systematic racial bias employed to stymie African American progress.

Ukweli provides insight into the struggles Black people have faced as they’ve made substantial contributions to America, and helped to define its soul. It shows a part of American history often overlooked or misunderstood. Inspired by a poetry, lecture, and dialogue series of the same name organized by poet Horace Mungin in 2020 at Charleston’s McLeod Plantation, Evening Post Books released Ukweli in February 2022.

Following the signing from 3-4, we’ll have an open discussion (refreshments served). This is a limited seating event – the link to register is https://www.eventbrite.com/e/book-signing-talk-ukweli-searching-for-healing-truth-tickets-312465762507

Herb Frazier is special projects editor at the Charleston City Paper, a weekly newspaper in his hometown. He’s an author and the former marketing director at Magnolia Plantation and Gardens in Charleston. He has edited and reported for five daily newspapers in the South. When he was on the staff of The Post and Courier in Charleston he was named the S.C. Press Association’s 1990 Journalist of the Year.

He has led journalism workshops in Africa and South America for a federal agency and a Washington, D.C.-based journalism foundation. He is a member of the Gullah Geechee Cultural Heritage Corridor Commission.+ Google Calendar

How is banning books still a thing? Thankfully, there’s folks stepping up to make it a thing of the past: Join Stella Parton (who recently spoke out against attacks on her sister Dolly’s Imagination Library), authors of some of the most banned books in the country, and families fighting for the freedom to learn for a one-of-a-kind virtual event!

It’s a Read-In! While you watch, post a photo of yourself with your favorite banned book using the hashtag #BannedBookChallenge (we might even show some of the best during the event!).

Come for Stella and the books — and stay for specific ways to take action and get involved. You don’t want to miss this! Featured authors include Brad Meltzer, author of I Am Rosa Parks and I Am Martin Luther King, Jr.; Leslea Newman, author of Heather Has Two Mommies; Megan Madison and Jessica Ralli, authors of Our Skin, I.W. Gregorio, author of None of the Above, and Nikki Grimes, author of Ordinary Hazards.