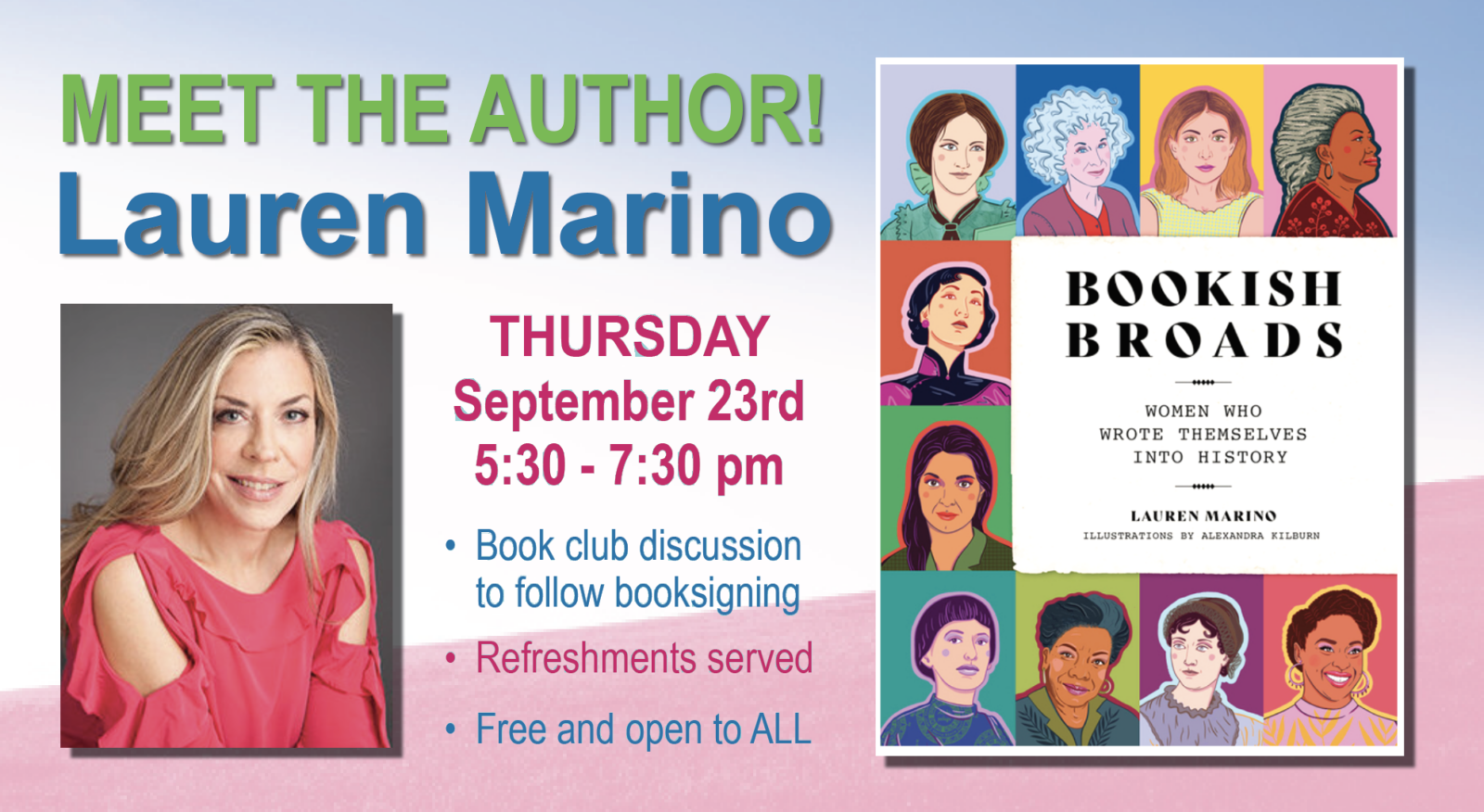 Open to ALL, tonight’s Pulpwood Queens book club will FIRST host a special book signing followed by an engaging discussion with the incomparable Lauren Marino about Bookish Broads: Women Who Wrote Themselves Into History. Be sure to grab a copy at the store and take advantage of 10% off bookclub pricing PLUS get your copy personalized by this in-demand author! Also on hand will be Lauren’s popular book, What Would Dolly Do?

We’re eager to talk about these amazing literary women and pick Lauren’s brain about great literature, and we have an AWESOME reader’s guide from Lauren here, too (click on the image at left!)

Treats (and wine!) will be served at the live discussion and those wishing to join virtually can do so via the link below – you can arrange with us to have your book signed by Lauren if you’re unable to attend (books must be purchased in advance).

Lauren Marino is the author of the popular Main Street Reads selection, What Would Dolly Do? and Jackie and Cassini. The founding editor of Gotham Books, Lauren has published multiple bestsellers and award-winning books and has been a frequent featured editor at events including the Faulkner Festival.

“I have loved books since before I learned to read and as a lifelong bookworm I’ve had the great privilege of spending my career close to what I love – words strung together and bound together into things of beauty. They have allowed me to explore people, places and ideas I wouldn’t be able to experience without them.

And join us for later hours on Friday when Summerville hosts a concert on Hutchinson Square… kicking off an awesome weekend at Main Street Reads and on into Sunday when downtown hosts Italian Fest!!!

September 25 @ 10:30 am – 12:30 pm
Main Street Reads, 115 S. Main St.
Summerville, SC + Google Map
Join us for a special book signing with Charleston’s own Roger B. Newman, with his newly released, Will O’ the Wisp: Madness, War, and Recompense. Polarizing, fire-eating discourse, propaganda, and aversion to reason bred secession madness in Charleston, S.C., and sold rebellion to a population with virtually nothing to gain and everything to lose. Men who should have known better and had become inured to the abomination of human bondage failed to step up. As Southern nationalists raced into Civil War,…Find out more »

AND ALLLLLL NEXT WEEK!

September 26 – October 2
Main Street Reads, 115 S. Main St.
Summerville, SC + Google Map
Banned Books Week (September 26 – October 2, 2021 this year) is an annual event celebrating the freedom to read. Typically held during the last week of September, it spotlights current and historical attempts to censor books in libraries and schools. It brings together the entire book community — librarians, booksellers, publishers, journalists, teachers, and readers of all types — in shared support of the freedom to seek and to express ideas, even those some consider unorthodox or unpopular. The…Find out more »

October 2 @ 10:30 am – 12:00 pm
Main Street Reads, 115 S. Main St.
Summerville, SC + Google Map
Don’t miss this chance to meet the master live and in person! Grady Hendrix, author of Horrorstor and The Southern Bookclub’s Guide to Slaying Vampires is back on top of the review lists with his latest release, The Final Girl Support Group. RESERVE YOUR SPOT/BOOK NOW Find out more »