Booksigning: Mark Epstein’s Jack “The Shot” Foley: A Legend for All Time 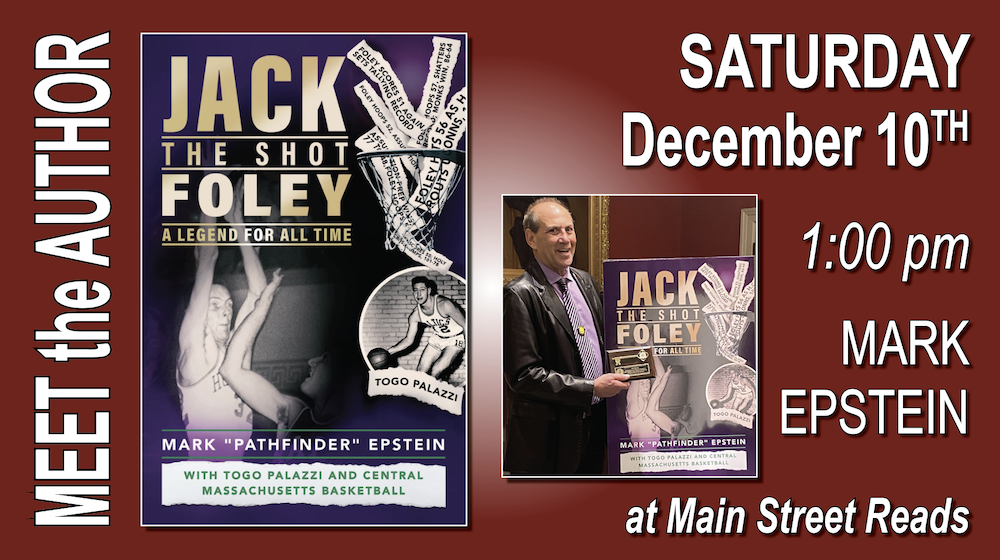 Join us for holiday cheery shopping and a book signing! Mark “Pathfinder” Epstein shares the inside story of college basketball icon Jack “The Shot” Foley and remembers a cherished time in Central Massachusetts sports history.

Epstein’s story charts the inspiring life and career of Jack Foley, from Foley’s early years as a budding nature lover to his legendary high school and college basketball days and his later years as an educator. Epstein also celebrates the old-fashioned sports traditions that captivated Foley’s hometown area of Central Massachusetts, and came to represent a golden age of college basketball. As he revisits this iconic era, Epstein shines a light on other basketball luminaries, like Togo Palazzi, as well as the revered institutions, including the College of the Holy Cross, that helped shape these sports heroes.

“For anyone who relishes gaining more knowledge and insight into the sport of basketball and the vibrant history of the City of Worcester, this will be a must-read for you.” —Jeff Twiss, vice president of media services, Boston Celtics.

Mark “Pathfinder” Epstein grew up in the “golden-era” of playground basketball in the “hot-bed” region known as Central Massachusetts. Mark was the ultimate basketball “junkie”. He has had many roles in his favorite sport throughout his lifetime. He is now retired from a career in education and resides with his wife Barbara in Mount Pleasant, South Carolina.

This is the author’s second book, the first one, “THEY CALL ME PATHFINDER, Education-Basketball-Equality” has received two awards. Mark is also a nationally recognized motivational speaker and can be reached at mepathfinder1@gmail.com.