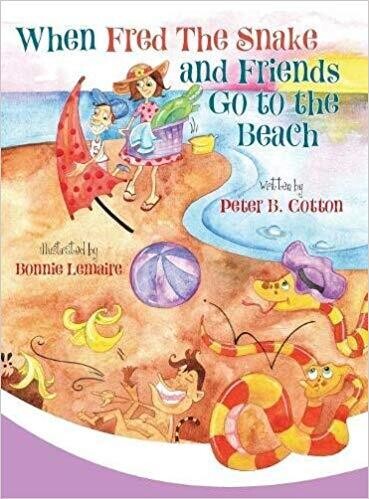 SKU 9781532343001
$17.95
In stock
1
Product Details
This award-winning series of rhyming books for young children are wriiten by a semi-retired medical professor (Peter Cotton), and profusely illustrated by brilliant Bonnie Lemaire. Initially, Fred the snake was sent by Jungle Jim to the boy (Jack) as a pet. In that first book Fred had an accident crossing the road, but was mended using a special thread that Jim collected from beneath a rhino. Then Jack took Fred with him to school, where he studied well and became popular by bending himself into many useful things on the playground. Fred became a little lonely, so wrote asking Jungle Jim to come and visit his new home, which he did along with many jungle friends. In the fourth book, all of them visited the sights of historic Charleston, South Carolina, where the author lives. Now, "When Fred the Snake and Friends go to the Beach" tells how they all spent a day at the beach on a barrier island.

Peter Cotton is a Professor of Medicine in the Division of Gastroenterology at the Medical University of South Carolina in Charleston. Born and raised in England, he moved to USA in 1986 to head up the Endoscopy Department at Duke University in Durham, NC. He moved to Charleston in 1994 to establish the Digestive Disease Center. He is known throughout the world for his expertise, innovation, research and teaching in the use of endoscopy procedures to manage GI problems that previously needed surgery. He named the procedure for treating biliary and pancreatic problems: ERCP (Endoscopic Retrograde CholangioPancreatography). He has authored popular textbooks, published over 300 peer-reviewed scientific articles and lectured in more than 50 countries. Now semi-retired, and encouraged by grandchildren, he has so far written five books about Fred the friendly snake. The first one "When Fred the Snake got Squished and Mended" was a bed-time story for his children when small, to teach them how (not) to cross the road. When they had their children, they asked "what happened to Fred-Fred?". Peter revamped the text, found a wonderful illustrator (Bonnie Lemaire in Canada) and started publishing the Fred book series.