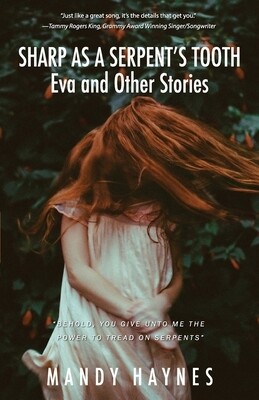 Sharp as a Serpent's Tooth: Eva and other stories by Mandy Haynes

You'll meet Eva, the young daughter of traveling Pentecostal preachers, who catches snakes while her parents hide behind the bible and a large wooden crate. Eva's life changes when she makes her first friend and realizes there is more to life than fear.

In Plans for Sweet Lorraine, you'll meet Lorraine's mama, Cordelia - a fiery red-head with a temper to match, and a mind as sharp as the sting from a leather strap. She'll do anything to keep her daughter safe. Even if she has to beat the devil himself.

Laurel, the young girl in The Day I Threw the Rock has no idea that she saved someone's life, or that she may have killed someone to do it. She just knows that she should be allowed to wear overalls and play ball like the boys. Well, ain't it true that she can throw a baseball harder and faster than Luke or John Randall? Just ask Sarah Rose's Uncle...

Junebug Fischer is ready to set the record straight and let you know what really happened the summer she turned fifteen. It's true, she killed someone, but she never killed nobody on purpose. That was purely accidental.

When Charlotte's world is turned upside down, her aunt is there to put it back on its axis. Charlotte learns that everything she's been told about her long lost aunt has been a lie, and her aunt teaches her many important lessons. The most important lesson is forgiveness. Cussing Snakes and Candy Cigarettes is proof that there's magic all around us, all we have to do is open our hearts and minds.