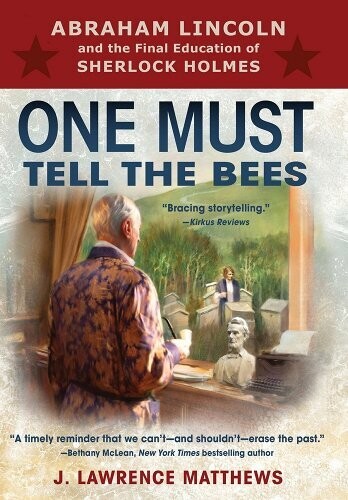 One Must Tell the Bees by J.L. Matthews

"President Lincoln is assassinated in his private box at Ford's!"

When those harrowing words ring out during a children's entertainment in Washington on the evening of April 14, 1865, a quick-thinking young chemist from England named Johnnie Holmes grabs the 12-year-old son of the dying President, races the boy to safety, and soon finds himself enlisted in the most infamous manhunt in history.

One Must Tell the Bees is the untold story of Sherlock Holmes's journey from the streets of London to the White House of Abraham Lincoln and, in company with a freed slave named after the dead President, their breathtaking pursuit and capture of John Wilkes Booth. It is the very first case of the man who would become known to the world as Sherlock Holmes, and as readers will discover, it will haunt him until his very last.

At a time when Western history is being reexamined and retold, old heroes cast aside and statues torn down, and even the legacy of Abraham Lincoln, "the Great Emancipator," is questioned, One Must Tell the Bees is a timely reminder that our history deserves to be understood before it is entirely undone.